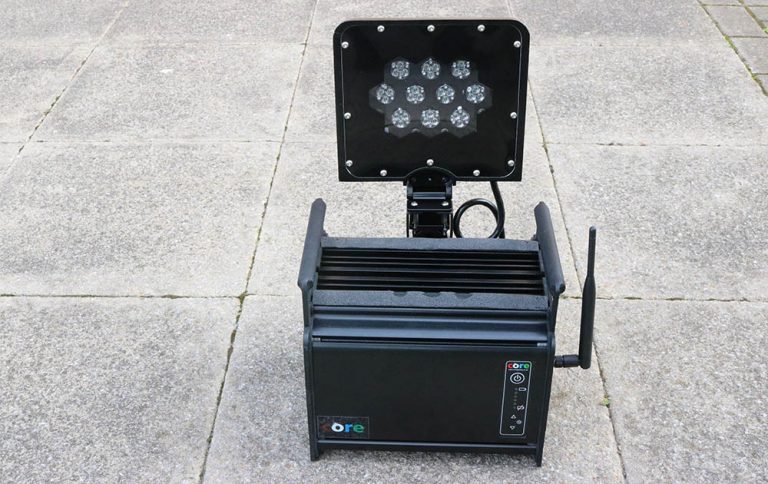 Modified CORE floodlights have made their way to the North Pole to act as a temporary runway, two years after they were created for a similar role in Antarctica.

CORE Lighting MD Phil Ion was approached four years ago by specialist aviation consultancy NAS Corporation to create bespoke floodlights to act as a temporary runway, guiding planes to land equipment and people in Antarctica. One year later a second set was purchased for a larger runway for the largest aircraft.

The battery-powered lights were required to be sturdy, weatherproof and able to withstand extremes in temperature and winds up to 185mph for short periods of time. Ion and the CORE team, in the company’s UK factory, adapted the existing floodlight product to meet these specific requirements.

The lights also needed to be visible from a significant distance during the daytime, to suit the long Antarctic days, and when tested they could be seen from over 9 miles away when tested on Salisbury Plain, and much further when used on location.

The CORE R&D department also added Wireless DMX in a battery powered control box (with a tweaked antenna for longer range), and enabled a “Running Rabbit” sequence which would be visible to pilots and guide them into landing.

The third and most recent batch of lights have been shipped to the Arctic via Svalbard in Norway, to be put to use as a runway for both business and leisure visitors and equipment.

Phil Ion commented: ‘“This has been an interesting and challenging product, giving the CORE team a chance to put their skills to the test and create a truly bespoke and durable piece of lighting equipment that will be in use for many years to come.”